the Tale of the nomad

Like Prince, Nomad was the houseboat formerly known as the Jenny B III. Before making his/her way north, he/she spent most of their time home ported out of Baltimore, Maryland where he/she was well loved and enjoyed all along the Chesapeake Bay for many years. We purchased (pre)Nomad in March 2018 – at the spry age of 50 – to begin the creation of Just Add Water Floating Camps, a unique houseboat rental and private charter experience with Nomad as the flagship.

Nomad is a 34-foot, Thunderbird Drift-R-Cruz 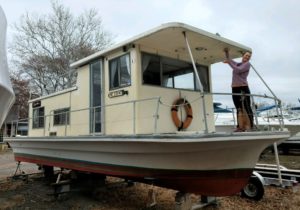 Houseboat that was built in 1968. These houseboats were of hearty design, intended for open ocean use, and are some of the most stable – and comfortable – live-aboards ever built. Nomad was meticulously maintained by his previous owners (with the hundreds-page maintenance log to prove it!) and in fantastic shape. But in an effort to help him feel a bit more at home in his northern surroundings, he needed a few modifications. So in the spring (and what bled into the summer…) of 2018, he was transported to Falmouth, Maine and given 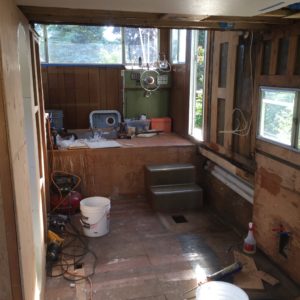 a northern exposure face-lift. It was there that Nomad transformed from a houseboat to a Floating Camp.

Rheanna has long planned to live in a tiny house and was on track to do so when her Dad discovered Rick Keith, the amazing boat builder based out of Falmouth, Maine, and his beautifully unique shanty houseboat designs. After lusting over his website for a few days, she decided to explore “floating tiny houses” as an option for seasonal living in Maine. About the same time, her Dad found the Jenny B III for sale in Baltimore. Jenny was a beautiful old houseboat in fantastic condition, and Rheanna 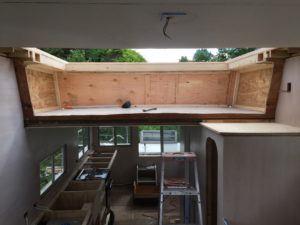 soon decided to work with Rick to redesign the boat to better fit the cabin and camping feel of western Maine.

Nomad’s structure and hull were sound, but his insides were in need of some updating. When sleeping on the water in a loft with pop-up hatches under the dark sky sanctuary of Maine sounded too good to deny, we went into full demo-mode. Nomad was gutted and his roof (carefully) chopped to create the open space and airy feel that now exists aboard. And while we were at it, we upgraded the bathroom, added a few updated appliances, completely re-did the kitchen, and installed a propane heater (it is Maine, after all).

While the renovation brought new life to Nomad, you cannot deny the old-soul feel when you step aboard. We kept as many original pieces as we could from the old Jenny B III – you may be able to spot them when you stay on board – and he’s still piloted at the original helm from 1968.

And now the name… 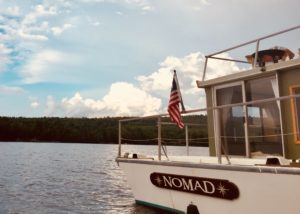 Re-naming a boat is kind of a nautical no-no. Bad luck. But we figured the demonstrable change to the boat, coupled with its new surroundings, warranted a little leniency from King Neptune.

How the Jenny B became a ‘he’ is a bit more ephemeral. During the renovation project in Falmouth, we kept catching ourselves referring to the boat as ‘he.’ There was just a masculine vibe that everyone felt and he took on a definite personality. So She just kind of morphed into a He.

But the task of choosing a new name….there is a bit of a daunting feel when it comes to naming something. As if you are part of its creation. We looked to our surroundings, our take on the Maine Lake experience, what this new life expansion meant. Our family is blissfully full of constant change. We move, modify, iterate, and travel almost constantly. Rheanna in particular has a hard time answering the “so, where do you live?” question. This houseboat was her first attempt at ‘settling down’ before the Just Add Water enterprise came to fruition.

While there were many lovely name options battered about – Pond Hopper, Latitude, Loon Song, Boaty McBoat Face – when Rheanna saw the word “Nomad” on a poster one day, she knew immediately that was the name.

On July 26th, 2018, after four months of painstaking work and generous 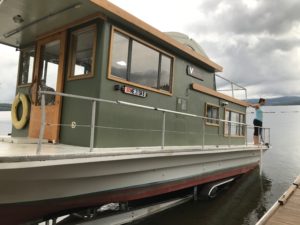 support from family and friends, Nomad launched on his maiden voyage on Rangeley Lake. Soon after, Just Add Water Floating Camps officially launched as well with Nomad as our premier Floating Camp. From day one, he has brought intrigue, joy and simple pleasure to the lake for all that step aboard.

We have moved on from Western Maine and added a new Floating Camp to the crew, but Nomad will always be the first Floating Camp on Rangeley Lake.

Come Float With Us
Close Menu